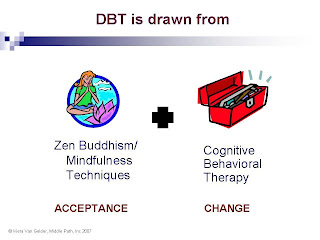 In the previous post, the question came up of whether DBT works.  I have not undergone this therapy, so I invite responses from anyone who has.
In the meantime, here is a bit of unexpected skepticism towards DBT from an article in a British journal on psychiatric treatment:

Dialectical behaviour therapy (DBT; Linehan, 1993) is based on the principle that BPD is essentially the result of deficits in interpersonal and self-regulatory skills and that these skills can be taught in therapy.  Defective affect regulation is seen as particularly important.  Treatment consists of weekly individual and group therapy sessions based on a skills-training model, together with out-of-hours telephone contact with the therapist.

Dialectical behaviour therapy has been shown, in a single study, to be superior to 'treatment as usual' in reducing self-harm and time spent in hospital, but not subjective experiences such as depression and hopelessness (Linehan et al, 1991).  There were also significant improvements in social and global functioning and anger (Linehan et al, 1994).  However by one year after the end of treatment, rates of self-harm were no different in the DBT group and treatment-as-usual groups, although both had improved (Linehan et al, 1993).
Despite this essentially negative finding, DBT has attracted considerable interest; however, Linehan's study is open to a number of methodological criticisms.  Only 39 patients were studied, all of them female, and of these only 20 were fully assessed.  The level of self-harm required for entry into the study (two episodes in the last five years and one in the last eight weeks) may have led to the inclusion of patients who were less severely disturbed than those commonly seen in clinical practice.  Furthermore, DBT involves a high level of input from professionals and it is not yet clear whether it is the skills training itself or simply the high level of support which leads to the reduction in self-harm.
-Anthony P. Winston, "Recent Developments in Borderline Personality Disorder" (2000)

This assessment of DBT surprised me.  I had never heard negative remarks about this therapeutic approach before.  Reading Linehan's dense tome on CBT for borderlines helped me a lot in reconfiguring my attitudes.  The idea of radical acceptance was at first a big frustrating puzzle to me - another opaque window - but gradually it settled inside me as something useful that I can draw on, especially regarding family relationships.

Anybody else have thoughts on DBT, CBT, Linehan, or this methodological critique from Winston?
Posted by borderlinePhD at 11:13 AM 37 comments:

A reader of Girl in Need of a Tourniquet emailed me this week with some follow up questions, and with her permission I am sharing our correspondence with readers of this blog. Thanks, Joanna, for collaborating with me on this post!


I realise you're probably extremely busy with all your responsibilities as an author and professor but I just wondered if you'd have time to answer a few quick questions regarding your book/BPD.  If not, I completely understand.


I thought your book was amazing, by the way, very real and unique to other autobiographies I've read by people with Borderline.  It certainly helped me in my obstacled journey as a Borderline, although I'm now reflecting more on my own thoughts, feelings and behaviours, especially of the past.  Hopefully, this will be some form of self-therapy for me.  It is certainly comforting to know I'm not the only one who has offbeat thoughts and emotions.


So my questions - I was wondering if you have done DBT which is thought to be groundbreaking therapy for Borderlines, and if so, was it helpful?  I have done two modules of DBT and to be honest, while it has helped with some of my behaviour where interpersonal relationships are concerned, it hasn't helped greatly with making me 'feel' better.  As you mentioned in your book, (from another author) when one is pathologically anxious or in distress, methods such as meditation and physical exercise don't work too well.  I find when I am in what I call 'one of my rages' or need for self-harm, there is nothing stopping me, and meditation and mindfulness are the last things on my mind.


My other question - I believe you were diagnosed quite late, in your early thirties, as I was too (just a year ago actually).  Did you experience similar emotions, feelings, thoughts and behaviours when you were much younger and just went undiagnosed, or do you believe it is something that appeared later for you?  I always knew I was different (different in the sexuality as well as mental sense) and went through my twenties just thinking it was depression/dysthymia.  I didn't even start self-harming until I was in my early thirties, although I always went for some very fast and out of control drives when the tension and anger rose.


And one last very tiny question - even though you're now married, do you still feel like there is perhaps a 'hole' or something missing (I am actually not sure if you spoke of this in your book anyway)?  I have a wonderful girlfriend but still feel as though something is missing in my core, my soul.  It is something now that I'm older I realise will always be there.


Anyway, thank you for reading my email, and thank you so much for writing your book.  I just wish it went on for longer!

Thanks for writing.  I am happy to answer your questions.  Would you be comfortable with me using your email and my responses on my blog?

I have not gone through DBT, but I have listened to Pema Chodron for many years now, and I read a book called Feeling Good which is a CBT-based book, and both of these sources provided the kind of cognitive reconditioning I needed in order to improve my overall mental well-being.  I have been lucky to find that I could implement ideas from books and audiobooks in my life with minimal therapeutic supervision.  From what I understand, most people need more structured guidance, but if the choice is between books/audiobooks and nothing, then I say try the books :-)  The best tactic for me is to read and listen during periods of low-grade anxiety as a way to manage my emotions and keep them from getting too big and uncomfortable.  I also reduced my alcohol intake significantly because I finally understood and accepted that alcohol amplifies my negative feelings to a level where I cannot manage them, so it is like a "gateway drug" into emotional chaos.  I was diagnosed around age 31, about six years ago, but I did always know something was off for me.  Like you, I thought it was depression, and I thought it was basically what I learned in my undergraduate literature courses to call the "human condition."

It is not the human condition, I now know.

And in fact I was fascinated to read that some of the authors and artists of the so-called human condition (e.g., Sartre, Munch) were suffering from severe abandonment depression related to childhood loss of attachment figures.  I am married now, but as I say in the book, marriage is no cure for an attachment disorder (I prefer "attachment disorder" to "personality disorder," because of the way the term shifts focus to the dynamic of pain rather than the person herself).  I still experience loneliness, frustration, abandonment feelings, engulfment feelings, and a basic restlessness, but I don't look to my partner to correct those feelings.  It is my responsibility to explore, manage, ventilate, and refuse to be at the mercy of these emotions.  I have made enormous progress towards what psychologists call "integration" as a result of writing the book and doing the cognitive reconditioning that accompanied my writing process.  Old painful memories have taken on a less frightening dimension.  My working models of self, other, and world have all shifted in a positive direction. 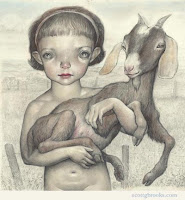 I am working to shed the "goat girl" narrative of myself as monstrous and unwanted, and to replace it with a more friendly view of myself as valuable, interesting, pleasant, and so on.  My view of others is shifting from the other as disapproving judge to the other as simply someone living their own life with their own hangups and gifts just like me.  And the world looks less hostile now, more neutral and interesting.  Those changes (as opposed to my marital status) are helping me feel full instead of empty and to feel whole instead of like a "hole."  The work really has to do with what's going on inside us, but I am lucky to have a partner who will engage in ongoing conversations about such things, who pushes me to keep reconditioning myself to be less easily thrown off my mood, and who listens earnestly when I say I feel unheard or invalidated and who is open to making changes in our interpersonal dynamics to improve the space of our marriage for both of us.

I hope these responses are helpful to you.  Again, thanks for writing me and for supporting the book.

All best, Lisa Johnson
Posted by borderlinePhD at 9:02 PM 4 comments: